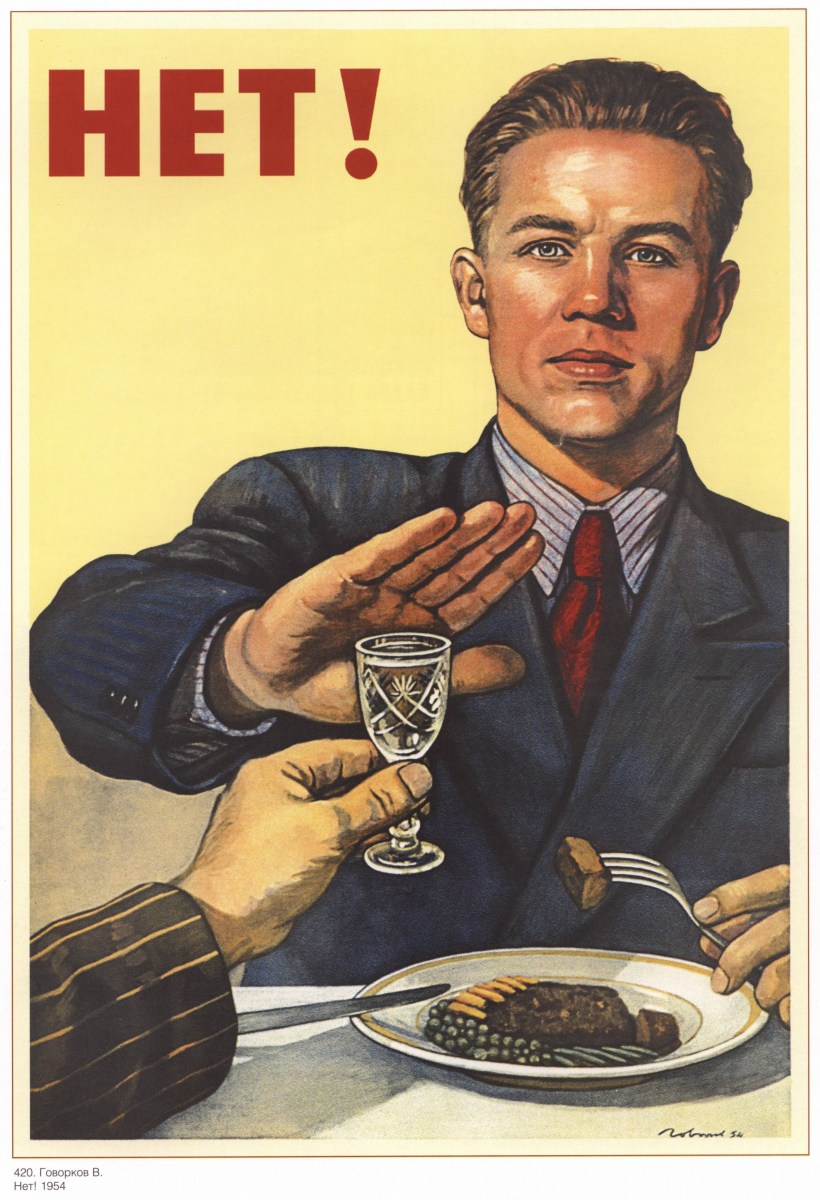 It’s hard to believe that this is the last blog post of the year already.  As I sat down to research for a topic to write about this week, I found something rather peculiar:  the Anti-Alcohol Campaign.  What?  An anti-alcohol campaign in Russia?  I was taken aback to say the least.  Alcohol is a staple in Russian culture and for it to have a movement against it was, in my  opinion, a big change.

Alcohol runs deep in Russian history; dating back to a quote that Grand Prince Vladimir (980-1015 AD) said (or may not have said, but is still associated with him nonetheless), “Drinking is the joy of Rus’ we cannot do without it” (University of Pittsburgh).  As the tale continues, he decided against making the state religion of Russia Islam because of its limitations on drinking hard liquor (University of Pittsburgh).  While this all may be tall tale, it shows how deep and far back the culture of drinking goes in Russia.  Drinking is often associated with hospitality, bonding with friends, and celebrations in Russian culture (Geldern).  Having alcohol interwoven with common aspects of society in turn made alcohol a common aspect of society as well.  Having alcohol be as common place as it was lead to a variety of issues, including alcoholism.  Alcoholism in Russia has been connected with high rates of child abuse, suicide, divorce, absenteeism, and accidents at the workplace (Geldern).  This in turn led to a higher mortality rate in males as a result of alcohol (Geldern).

Not only was alcohol a part of the culture, but it was a large portion of the economy since the government had a monopoly on alcohol production and distribution.  In 1979, the government  made 25.4 billion rubles in indirect taxes associated with the sale of alcohol (Geldern).

Russia decided to take action, following the social concerns found in the 1970s, General Secretary Mikhail Gorbachev started a campaign in May of 1985 against alcohol abuse.  This campaign featured a reduction in alcohol production and sales, as well as limiting the kind of stores allowed to sell alcohol, closing a number of vodka distilleries, destroying vineyards, and prohibiting the sale of alcohol before 2pm in restaurants (Geldern).

The anti-alcohol campaign went through multiple different aspects of the society, including in forms of music and of videos released of Russian police helping drunks (as forms of discouraging drinking).  The fact that music was a form of campaigning against alcohol is fascinating to me; it shows how the campaign attempted to reach far and wide to reach the masses and discourage a habit that had become a problem.

While this “prohibition” did create a decline in alcohol consumption,  it also created an influx of organized crime (just like prohibition in the United States did), more cases of alcohol poisoning, and the production of moonshine (Geldern).  Because of these negative “side effects”, the campaign was stopped after 1987–lasting only 2 years.

This was an interesting topic that I truly enjoyed researching.  I would never have thought that something as ingrained in Russian society as alcohol would have a campaign run against it.  The statistics of alcohol problems in Russia and the subsequent government actions were fascinating and spoke to a true problem.

5 thoughts on “One More Drink?”